Dec 1, 2022 Considerations between Laptops and Computer Processors, Difference between laptop and desktop processor, What is a Processor 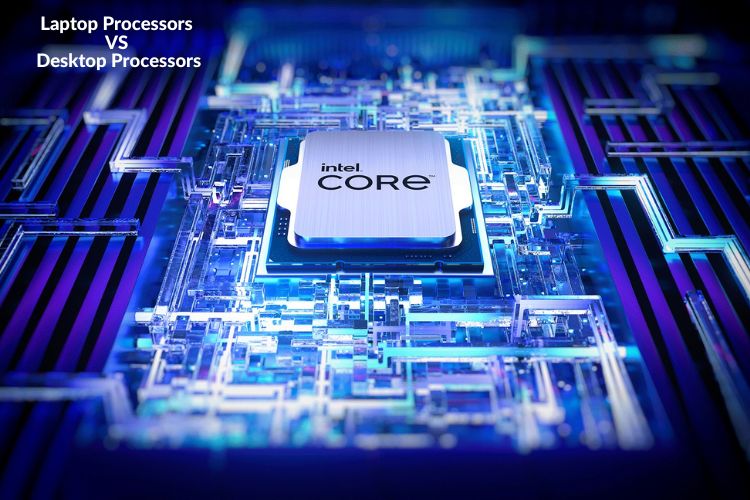 The processing power of laptops has increased tremendously over time and each new generation brings even more features. These include improving the boost frequencies and incorporating more cores. Nevertheless, a desktop processor and a laptop processor have significant differences. And to answer the question:

CPUs in laptops and computers are not the same; the hardware that supports the CPUs can be dramatically different. That’s because laptop CPUs are relatively small and more compact than desktop CPUs means that they are slower which results in slower speeds.

This article will review the differences between laptop and home computer CPUs, considering various factors.

What is a Processor?

The CPU in a laptop or computer is the brain, where all processing occurs. CPU speed frequently corresponds directly with overall computer speed, while hard disk speed and RAM amount also play important roles.

CPU speed is measured in gigahertz, with a greater number signifying the number of concurrent processes the CPU can manage. To a significant extent, a larger number indicates a faster computer, and this is true – though you won’t notice much difference between a 2.1- and 2.2-GHz processor.

“Clock speed” and “number of cores” are two of the most considerable factors, impacting the overall performance of the processors.

Differences between Laptop and Desktop Processors

When comparing the CPUs of a laptop and a computer, the first thing that comes to mind is that the laptop has a much smaller CPU compared to the larger processor found on a workstation. Laptops are designed with minimal space in mind, which is why every component of a laptop is significantly smaller than that of a desktop – GPU, RAM, HDD, Motherboard Board, and even the fans.

Laptops are generally portable and take up less space on the table top because of their compact size. On the other hands, desktop computers have no such constraint. You, as an end user, can change the form factor of your computer to suit your needs. You can build smaller desktop PCs with micro – ATX or mini ITX motherboards, or you can choose a full form factor ATX motherboard.

Because computers aren’t concerned with how much room they take up, their CPUs can be as large as possible based on the CPU’s power and capability.

Desktop processors need to stay cool, and that’s where the cooler comes in. It usually has twice the cooling capacity of a standard Intel laptop cooling system. Even low-end coolers, such as the Intel processor’s stock cooler, can be substantially superior to more expensive cooling power.

A processor having higher thermal headroom has more power. PC processors have faster clock speeds and can run for longer periods than laptop processors. This finally leads to improved CPU performance. Heat is another problem that might hinder a laptop’s processing power.

A laptop processor will increase its clock speed and require adequate cooling to cool down the heat. It is common for thin or light laptops to reach temperatures above 90 degrees Celsius. Personal computer processors typically range between 70 to 80 degrees.

To prevent overheating, laptop processors drop their clock speeds which results in a loss of the performance. Hence, they no longer remain in a position to compete with their desktop counterparts.

Another difference is the power that laptop and desktop CPUs may draw. Thermal Design Power (or TDP) is a rating assigned to each processor. This rating is expressed in Watts. TDP ratings represent the maximum amount of heat that a processor can produce. Laptop processors usually have a lower TDP rating than PC processors due to cooling limits.

These TDP ratings range from 15W to 45W. TDP specifications for desktop processors range from 15W to 35W. However, they are limited to a maximum output of 200W. A laptop must be capable of running solely on its internal battery. As a laptop mainly runs on its battery, its CPU can only draw a specific amount of power from it, or else the battery would drain soon.

This is true even if you use the power adapter that comes with the laptop. Meanwhile, because desktop computers are intended to be used while plugged into a power outlet, their CPUs are engineered to consume more power.

Although the processor’s highest frequency is 3.5GHz, its base frequency may be 2.4GHz. The fastest part of the processor, the core frequency, allows it to process more instructions per second.

The number of instructions per second that a processor can process depends on its core frequency. As we’ve already stated, the system will produce significantly more heat if the clock speeds are increased.

Since laptops have less thermal headroom than personal computers, their CPUs’ clock speeds may be lower to prevent overheating. In this case, overclockable chips are a viable solution. You can raise the stock clock frequencies to achieve additional performance.

If your laptop’s processor can be overclocked, you can only add 200–300 MHz before your cooling system reaches its maximum.  Workstation processors can, however, be overclocked up to 1GHz with sufficient cooling to attain maximum performance.

Because of the CPU size in both options, laptops cannot afford to have more cores than desktops. Consider the several cores to be various parts of the brain, each with its capabilities.

A laptop processor may contend with heat and power limitations. A laptop’s storage capacity is limited. Because of these characteristics, desktop processors frequently have more cores than laptop equivalents.

A CPU with multiple cores may outperform a single-core CPU of the same performance significantly.

Multiple cores enable desktops to run multiple tasks at the same time more efficiently, improving performance when multitasking or under the demands of powerful apps and programs. They also have a higher cache. The more cache your CPU has, the more data it can store for swift retrieval.

Some Other Considerations between Laptops and Computer Processors

The intricacy of the technology required to pack a powerful processor into such a small size drives up the price of the laptop chipsets relative to computer processors.

Although it may have more powerful components, a high-end gaming laptop may cost more than a gaming rig. Instead of being designed for high performance, laptops are more about convenience.

Advances in technology often occur at a rapid pace. Those top-of-the-line computers you bought just a few years ago are probably mediocre (or worse) today.

On the other hand, a personal computer’s flexibility in adopting hardware upgrades makes this less of a concern. Upgrading your computer’s hardware is as simple as purchasing a new graphics card, RAM, hard drive, etc.

In contrast to computers, laptops often do not allow the processor to be upgraded. A laptop’s memory and hard disk are the only components that can be updated. The remaining components are built-in and cannot be upgraded, or the laptop is not designed to function with the updated component. Any update other than the hard drive and memory usually necessitates the purchase of a new laptop.

Aside from that, some behemoth laptop processors are still available in the market. They won’t be kind to your wallet, but if you want power from your laptop, you’ll have to pay up. Especially if you desire power equivalent to some powerful computers.

Intel laptops and AMD laptop processors have been driving innovation in the processor manufacturing field for years. So, they’ll be the two names you’ll be deciding between when selecting your system.

If you compare the performance of a laptop CPU to that of a computer CPU, the desktop CPU wins hands down.

Because a laptop is a more compact system than a workstation, it cannot accommodate a larger and more powerful CPU. While laptop CPUs are getting faster each year, their bulkier PC counterparts are still far more competent. These processors are not interchangeable because they were designed for different purposes.

Founder of YBT Industries and one of the most recognized distribution experts in the world, Tzvi Odzer is a highly successful businessman who has a proven track record of building companies from scratch. Tzvi is a renowned expert on the distribution business and has more than 30 years of experience in the field. He was named as the Entrepreneur of the Year for Distribution by Ernst & Young in 2000. He is committed to helping start-up entrepreneurs transform the distribution landscape and is always eager to share his business knowledge with others.

You will also Love to Read: Get Next Level of Laptop Experience with These Gadgets